Beaufort North Carolina that is.  Our our way north we stopped at one of our favorite places.  We have now visited Beaufort 4 times!  We like it because it is such a cute town with beautiful houses and nice people.  We like the neighborhoods so much I think Stanley’s walk time doubled!  We met up again with our buddies Kirk and Donna from Ainulindale and had a nice dinner out with them and several boat dinners and generally just had a great time!

Ryana at the Beaufort Docks

The wild horses on the island across from the city front

Stanley, visiting his favorite bar The Backstreet Pub and just hanging out. 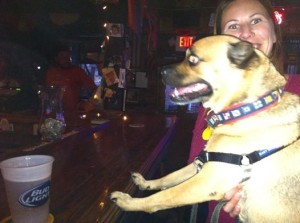 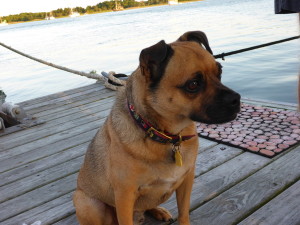 Off to Beaufort, NC this morning. Stanley can’t wait to have a beer at the Backstreet Pub!

After a sleepless night on anchor watch with gusts over 30 knots we have decided to retreat to Beaufort docks. What really sealed the deal is watching other boats in our anchorage dragged anchor and then come morning they all left! We never dragged, but didn’t feel comfortable going ashore and leaving the boat by itself. Now we are safely tied up to the dock right in downtown Beaufort and can go enjoy the festivities at the Wooden Boat show without worry. Long hot showers with endless water are a plus too! Ryan did an amazing job backing the boat into our slip with boats on all sides! It makes me remember why I keep him around. 🙂 Hopefully the weather will calm down and we can go back to anchor tomorrow night. If it doesn’t then I guess we’ll enjoy this luxury a little longer. Beaufort is such a fun town. It seems like there is some kind of festival or something every weekend. Well we’re off to the Wooden Boat show and happy our boat is safe without our attention.

Sunday morning was a bit hectic with last minute shopping and preparations.   The girls took the car to get a few things that were forgotten on the provisioning list, mostly Jack’s ham.   Once they returned the rental car was returned to the airport.  The next couple hours were spent storing provisions, fueling up and eating ice cream.  We cleared the 17th street bridge at 1:00pm and headed into the North Atlantic.

The first few hours couldn’t have been better, we had W to WSW winds around 14 to 18 knots with the boat speed bouncing between 9.5 to 10.5 overground, it truly was beautiful sailing for the first part of the afternoon.  Right after nightfall things changed, the wind began shifting to more of a WNW direction and squalls began to appear on the horizon.   For about 3 hours we continued to change direction avoiding the squalls that were lighting up the sky all around us, didn’t see too many lightning strikes hit the surface, but still made your butt pucker.  Diana was a bit oblivious to this as she was having trouble establishing her sea legs and ended up doing a bit of chumming off the back.  Since we did get Jack up for some support we let him sleep in until 3 am for his watch duties.

The wind continued to clock further north forcing a course further East than we really wanted.  The seas were not overly large but quite steep causing regular pounding from the bridge deck as we beat into them.  Fairly uneventful, not overly comfortable day at sea.  Saw a few dolphins and sharks, had a great dinner and Diana started feeling a bit better. 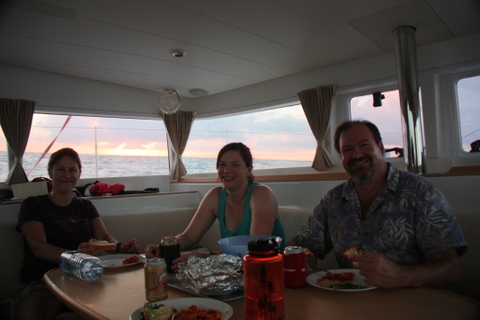 Though the seas continued to be rough we started the day with high spirits knowing we made it to Georgia and ate significant quantities of bacon.  After a few hours the bacon high wore off it was clear the crew was getting a bit tired of the rambunctious seas and pounding so it was decided to keep heading north but finish the day at anchorage in St Catherine’s sound.  The wind remained between 20-25knts out of NNE where we continued to sail at the tightest angle we could, still getting used to these catamarans, definitely not windward machines. 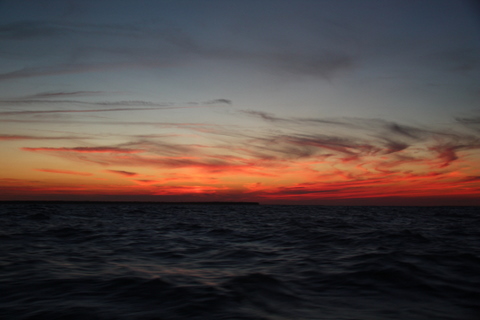 We lined up the channel just around dusk and would have to navigate the sound at dark, good charts, radar and crew on the bow really help with this.  We dropped anchor in about 10 feet of water and all crashed for the evening.

After a short conversation over breakfast it was decided we had some time to spare so why not try to wait out the northerly wind and hang out in Hilton Head for a day or two. 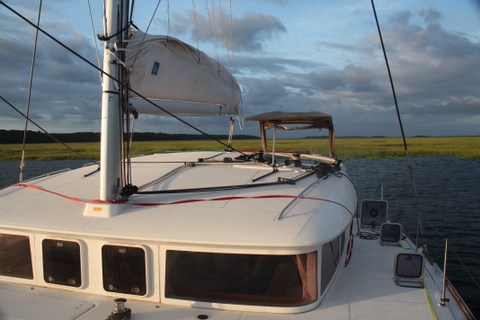 We quickly pulled anchor and began our slog north.  The seas were actually more confused than they were on Tuesday which further relieved us with our new plan.  We motorsailed for the majority of the day and made it to Hilton Head at 4pm.  Found a great little marina, Palmetto Bay, to hang out at for a day or two and enjoyed a great meal ashore where once again a significant quantity of sea creatures were consumed.

Weather and sea conditions have not changed so we decided to stay put in Palmetto Bay for one more day.  This gave us the chance to do a bit more provisioning, exploring and installation of the remote VHF at the helm (no idea why a highly optioned boat does not come with this crucial piece of $100 equipment).  Cynthia got some nasty blisters wearing her mom’s boat shoes san socks while we went and wandered the island we finished the day with Diana and Cynthia baking some pizzas and Jack getting his steak at the Black Marlin restaurant.   As always interesting folks were found at the bar, didn’t stay out too late as we were shoving off in the morning.

I think I remember hearing about sailing to a schedule is not an ideal way to plan a voyage. . . Well that is a luxury for the folks who are not currently employed.  The weather situation calmed somewhat, but still had that damn northerly wind.  We were not going to seas in dangerous conditions, just not ideal, when we have the luxury of time we would have spent more time at Hilton Head, for now back to sea.  After fueling up we shoved off a bit before 9 am.

After exiting the Tybee Channel and turning north we found choppy seas and proceeded to motor directly in to them to make our way to our final destination, Beaufort NC.  Though we were going directly into the seas and wind things have calmed a bit since Wednesday as were only experiencing light pounding from the bridge deck.  We had both fishing lines out, engines turning at 2200 RPM, making close to 6knts so all in all things not so bad.  Had a beautiful evening with Cynthia becoming quite excited over the bioluminescence, which is pretty cool stuff to watch in the wake.

This will be our last full day at sea as we are estimating coming into Beaufort tomorrow afternoon.

Jack finished up a fairly calm graveyard watch with a bit of boat traffic.  Not long after sunrise it was determined to raise some canvas and try to get this sailboat sailing again.  We couldn’t quite sail as close to the wind as needed for our course, but one engine turning low RPMs helps make us make pretty good speed.

Around 11am we had 15 to 20 dolphins riding our bow waves for a good 15 minutes it was a pretty cool experience and one I’m sure we’ll repeat on our future travels.  I’m sure seeing them frolicking and squeaking in the sea will brighten anyone’s mood no matter how bad the passage. 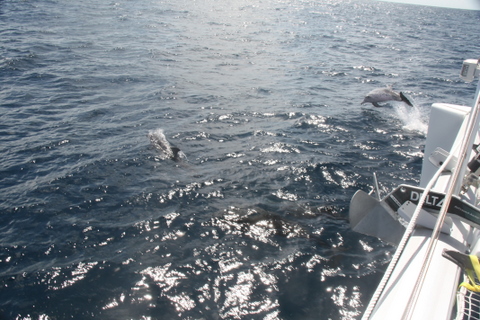 Still trying to coax as much forward momentum out of the boat as we can with lightening wind, just before going to both engines we luffed the sails to let Jack and Cynthia take a dip.  Jack made himself useful and scraped some growth off the props and all fun ended when a shark decided to come say ‘hi’, not necessarily a man eater but still unnerving. 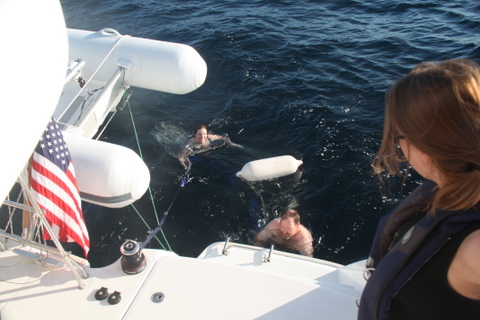 Had a great lasagna dinner with a beautiful sunset to finish the day with both engines driving us NNW.

After a quiet yet lumpy night watch spirits were high as we were about to make or goal of Beaufort NC.  The day was started with a great breakfast due to Jack’s cooking and continued to push engine speed a bit higher with the hope of making landfall with time for dinner and drinks.

At 3:30 pm we made landfall at the Town Creek Marina, just inside the Beaufort Bascule bridge,  to top off our fuel tanks and was granted permission to stay at the fuel dock as long as we wished.  Cool deal, because there are cocktails to be had at the Fish Tales restaurant.  After much celebration and a few Rum Punches and Dark and Stormies it was time to shove off and head up the creek to Jarret Bay Boat Yard. 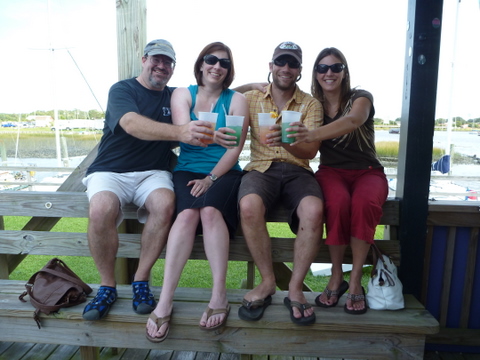 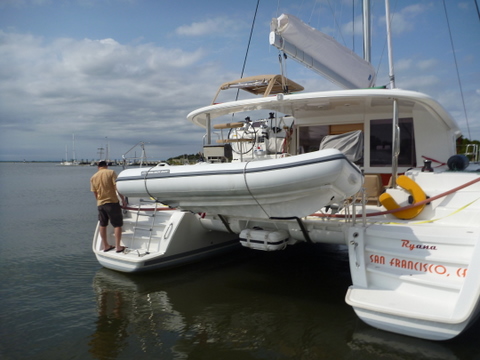 We arrived an hour before dusk and got some local knowledge from s/v Last Dance.  After cleaning up it was time to head into town for dinner and more celebratory cocktails.  We called a cab who was nice enough to call around to find a restaurant with a kitchen that was still open (it’s easy to forget Sundays in small towns can leave your options a bit slim).  We ended up having a great dinner at the Dockhouse and then wandered over to the BackStreet pub which is a really cool little old tavern.  None of us lasted too long as the cab was called once again as we shared a ride with a two other gentleman who got caught up on the town gossip with the cabbie, fun night!

Frantic, Frantic. . . We needed to get the boat hauled, cleaned and emptied of our things to catch our flights out of Raleigh at 3:45.

The boat was hauled, pressure washed and stacked fairly quickly.  I was hoping to give it a good wash down for it’s long storage,  but barely had time to think.  We got all things put away, locked up and had a conversation w/ the yard manager on things we wanted to get worked on. . . . Time to go!

First plan was to get a cab from the boat yard, then to enterprise to rent a car and then drive to Raleigh. . . not enough time to make it by 3:45.

So, ‘Hey cabbie, can you take us to the airport?’

‘Sure, New Bern, no problem’

So we took a cab all the way from Beaufort to Raleigh; had plenty of snacks to share and about 30 minutes in everyone was out cold.  The cabbie was a pretty interesting fellow who moved his family from Arlington VA to Beaufort for a more simple life.  He quit his accounting practice and drives cabs to stay busy, says it’s the best decision he’s ever made.  Hmm.

We’ll we made it to the airport with just a few minutes to spare, but our flights were delayed anyway.  We all shared a good linner at the restaurant and bid a farewell.   It was a great  10 days and couldn’t have done it without Cynthia and Jack.  Thanks a lot for the help!