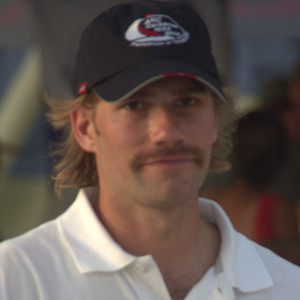 Ryan grew up in the Pacific Northwest where his affinity for cold damp weather allowed him to get out and enjoy everything the region had to offer which was pretty much just mountains and water. As boring as that sounds he had a great time growing up fishing for salmon up and down the Sound, off the coast and up in the Strait of Juan De Fuca. When he got to the Bay Area he had a hard time adapting to the sun and temperatures over 60F so he had no drive to get out on the water, but after a short while he knew that’s where he’d find solace. There were a few problems; salmon season was indefinitely closed, there were very few places to overnight and the Bay just wasn’t as pretty as the Sound. . . but most all recreational boats were sailboats. . .maybe he should learn to sail. After a quick lesson it was decided that was the way to enjoy the water her in Northern California. Having an amazing girlfriend known affectionately as Diana “Dream Killer” she helped invest in their first sailboat a Pearson 303 they named Frog after Ryan’s grandfather who frequented him on fishing trips as a child. Frog was sailed all over the Bay, Delta and Coast for a number of years. First berthed in Richmond which was great for after work trips then in Sausalito where great friends where made on “B” Dock. Pressured by his girlfriend now wife to go cruising Ryan gave in, cast off the dock lines and sailed off to the sunset. . . with wife (now known as Diana “Dream Crusher”) and dog of course. 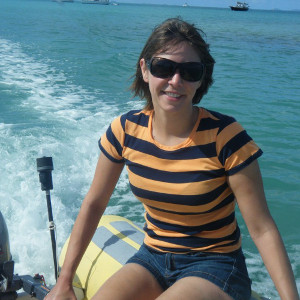 It’d be nice to say that Diana always dreamed of sailing off into the sunset.  Nice… but not true!  Diana grew up a landlubber in Northern California and didn’t get into boating until she met Ryan.  After being convinced to buy a boat she took some sailing classes and started to get into this sailing thing.  The move from Richmond to Sausalito B dock also showed how great the boating community is and how much fun you can have just at the dock as well.  One thing about Diana is she knows a good idea when she hears one!  So when Ryan started talking about this cruising idea she decided they needed to make it happen.  Going by the philosophy that you should do what you can now because who knows what tomorrow will bring brought a new urgency to the trip.  So that’s how, after a little arm twisting on Ryan, they ended up on Ryana for a 2 year adventure. 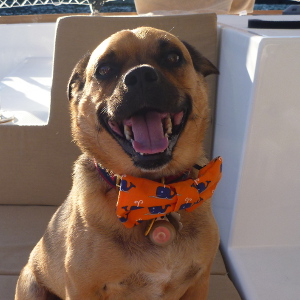 Stanley rescued Ryan and Diana on a beautiful autumn day in 2009 from ARF in Walnut Creek, CA.  He quickly became a capable snow and boat dog spending weekends in Lake Tahoe or on Frog in Sausalito.  He became Diana’s echo pressuring Ryan to take leave for a sailing adventure where he could spend more time with his pack.

Stanley recently earned his stripes as bona fide yacht dog by completing an 9 day passage to the Caribbean where he did his business on deck with no hesitation!  (there are a few issues with having a canine crew member . . .)