Everyone likes an excuse for a party right?  🙂  Well our going away was a good excuse.  We took over one of the gazebos and had a potluck with our friends from Port Annapolis and all around Annapolis!  It was a fun night but very bittersweet.  We’re going to miss these folks! If you have cats at home you may be interesting in cat furniture, The Refined Feline, cat trees. 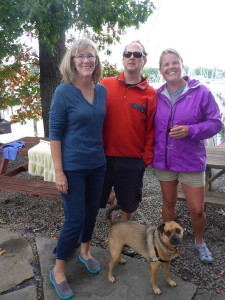 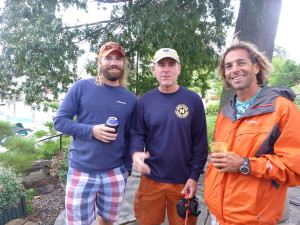 Ryan enjoying a drink with Rob and Paul. 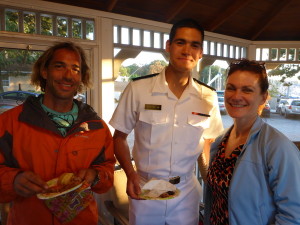 Paul and Lori with the midshipman Lori is sponsoring. 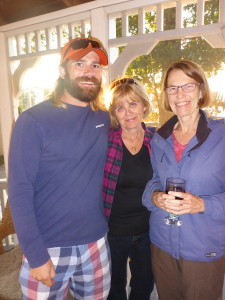 Ryan has a way with the ladies….Karen and Kate! 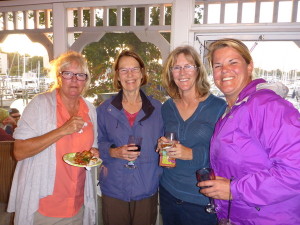 More gorgeous ladies…Gail, Kate, Jo and Monica. Gail cooked up some chicken wings on the bbq….YUM! 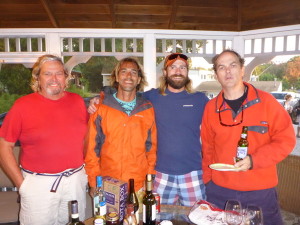 The guys…Joe, Paul, Ryan and Matt. 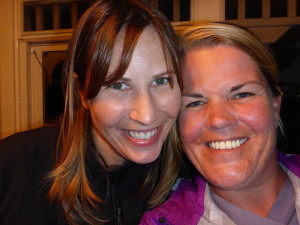 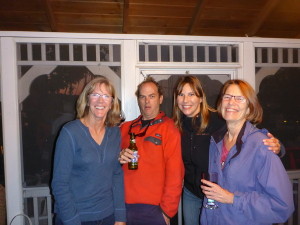 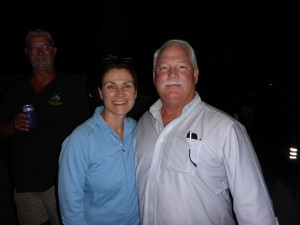 Lori and Alex without their super cute dog, and Stanley’s friend, Genni! 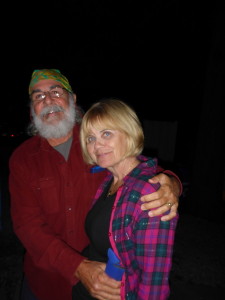 Ryan and Kate. Kate brought Ryan a yacht design book to get him started on his new passion. 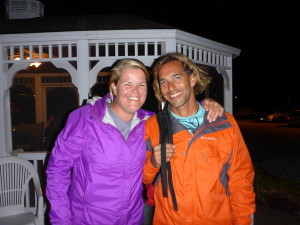 Monica and Paul. These guys are fun….maybe we can visit them in the BVIs!! 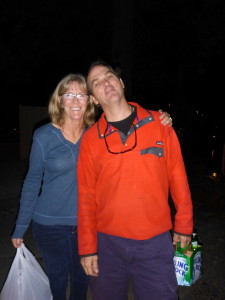 Our friend Greg came out for a quick visit over the weekend of July 5th. The first visitor we’ve had to the boat since moving aboard in April! Very exciting! We spent the morning of the 5th making sure the boat was in ship shape and praying nothing would break.  We wanted to greet Greg sitting on our back deck dressed in our fancy clothes drinking wine and pretend that’s what we did all day! By the way, in case you were wondering….It’s not! We had spent the previous few days completing boat chores (Ryan got the water maker working….WOOHOOO), scrubbing the hulls, doing laundry and grocery shopping. The last 2 may sound like simple tasks but when the laundromat is a half mile away and you have no car to carry back groceries its harder than you think. And the water maker was probably a 100 hour chore that Ryan had been working on for months!

Well anyway, Greg arrived in the late afternoon to where we were staying at Port Washington in Long Island. We hadn’t explored the town that much or eaten out (due to all those chores) so we welcomed the chance to go out when Greg arrived. We checked out the tiki bar at one marina, had dinner and then went to Louies for an after dinner drink. Port Washington is a nice town, not a whole lot going on but it’s cute.

Out on the town.

The next morning we got up and set off on an all day sail to Port Jefferson. It was one of the first days we sailed the whole way to where we going and was a nice change of pace. Usually we were trying to outrun thunder storms or get to a location early to get a good spot. But, on the way to Port Jeff we had a reserved mooring ball and clear weather so it didn’t matter how long it took! We had a nice relaxing day and even sailed down the channel into Port Jeff just because we could! 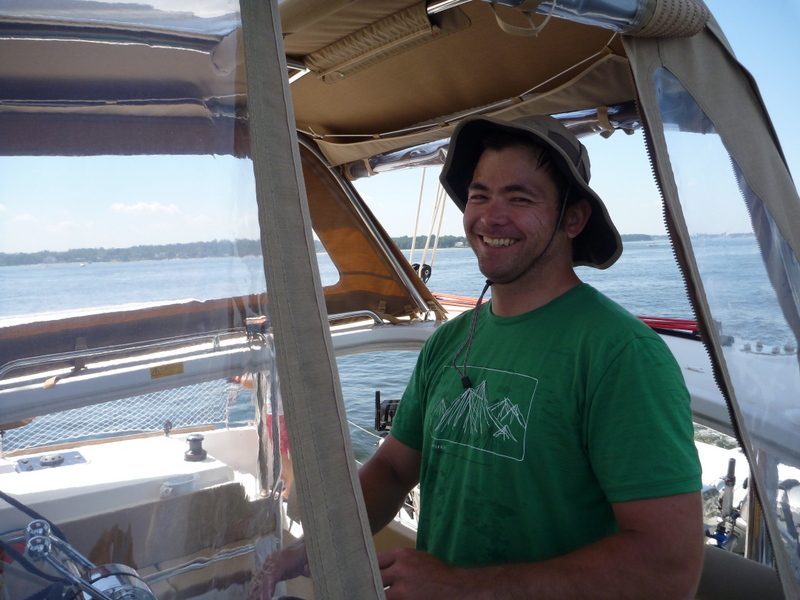 Greg at the helm. 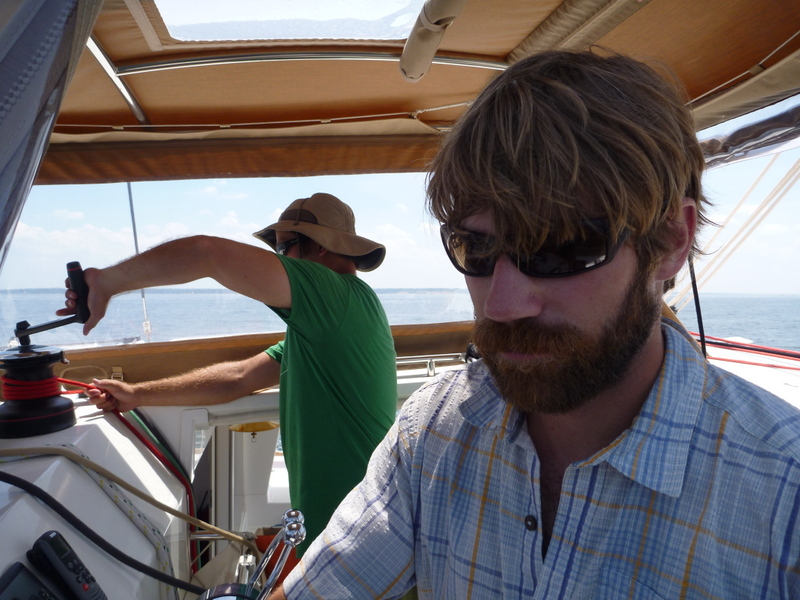 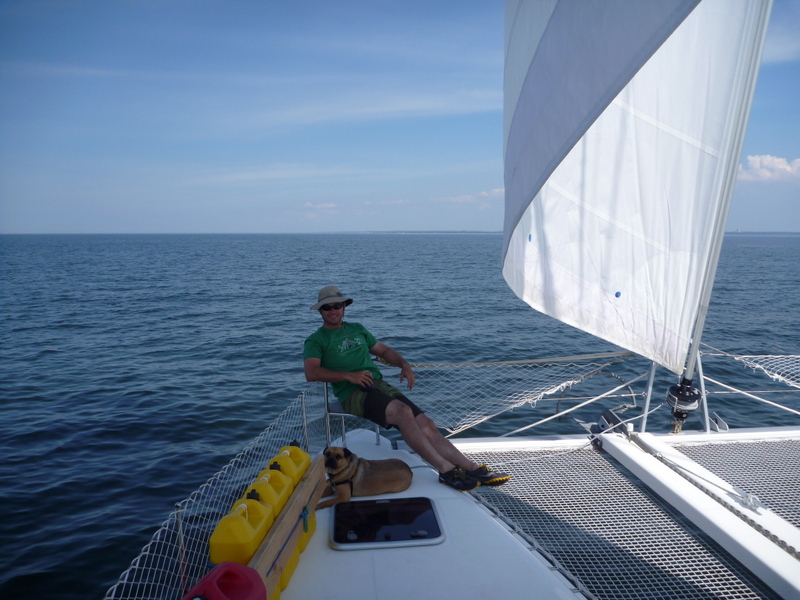 Greg and Stanley enjoying the best seat in the house.

What a great day for a sail!

Port Jeff is a nice protected harbor and the water looked clear so we decided go swimming! Well, Greg jumped in the water and then Ryan and I came in too. We haven’t been swimming at all yet because the water has been so murky but here I could actually see my toes, so in we went! And the fact that it was a billion degrees outside was also pretty convincing!

Enjoying some time in the water!

After some cooling off in the water we went out to explore Port Jeff which is a pretty awesome town! We arrived on a Saturday and the there were tons of people around. We had an amazing dinner at a Spanish restaurant and then wandered back to the boat.

The next day we did a tour of the harbor by dingy and found a small lagoon. There were some bluffs there that you could climb and come out looking at Long Island sound. It was really pretty and Greg even said it was Caribbean-esque. 🙂 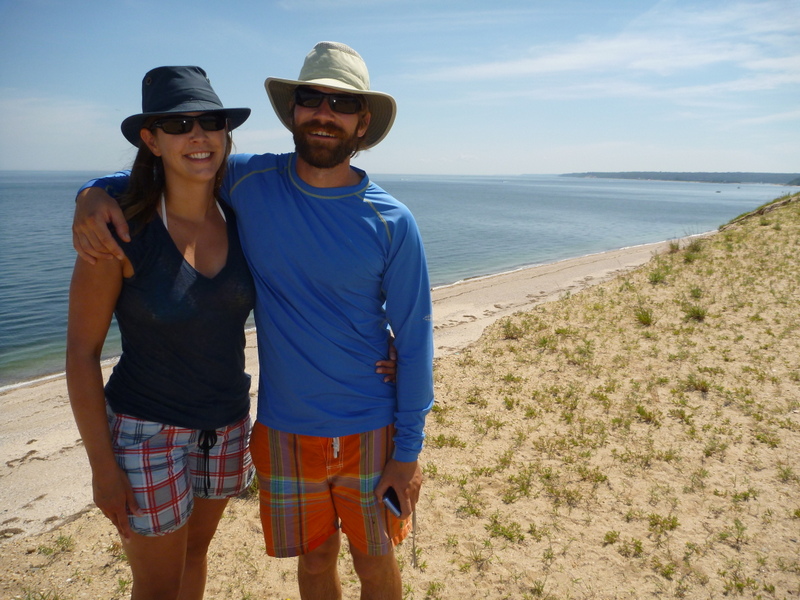 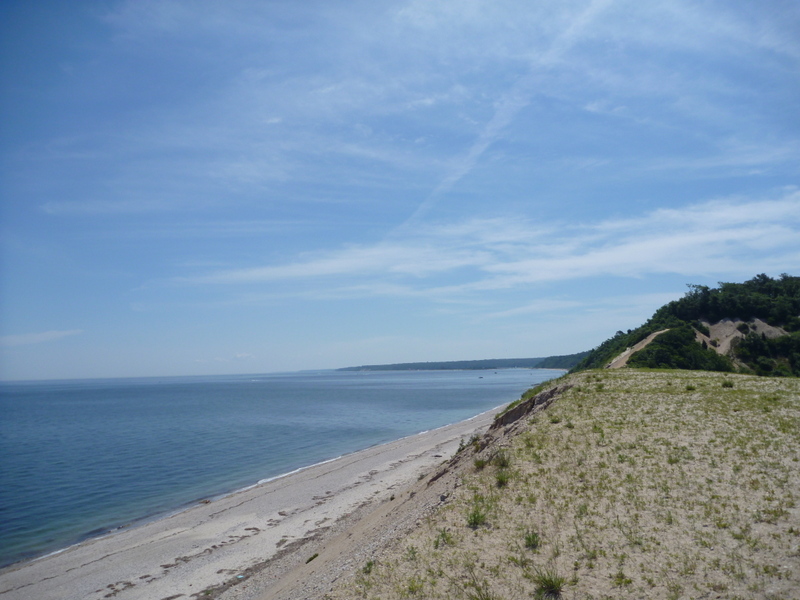 We pulled out the paddle board again here and Greg took Stanley for a little ride.

It was a fun visit and we hope Greg comes back soon!

Diana required that I do not do any boat chores until noon today so I have some time to write on our neglected blog. It’s been well over a month since my last post and a lot has happened, most of which has been chronicled by Diana, our trip across the country, time spent in Beaufort, passage up to the Chesapeake and a few of the place we’ve been so far. I’ll break this post down into my two most realizations on this trip; 1) there are some really interesting folks out there and 2) boats are a lot of work.

A month in we have met some really interesting folks floating around on the water. In Hampton VA we met Tony and Bente a super sweat retired couple that; have crossed the Atlantic via Iceland on a small single engine plane for their honeymoon, lived aboard their boat for 12 years 3 of which were in Venezuela where they stayed while Bente successfully battled cancer, and get this were professionally and personally close with Carl Sagan (these folks are very smart). After we left Hampton we made our way up to Deltaville, VA a small unincorporated community and met Michael on his very early 1960’s Prout Catamaran. Micheal has been sailing his small catamaran back and forth from the Bahamas to Virginia for over 30 years most of which he has been by himself and now he is in his mid 80’s! If there is anyone who I have ever met that needs to write a memoir he is on the top of my list. His father helped found BP, his childhood was spent in many countries in the East and West, he fought in WWII and then stayed to help keep peace during the founding of Israel, he married the daughter of a US ambassador, moved to the US had 3 kids and found himself to be a young widower. Michael did not bend to the wishes of his family and move back to the UK so his family could help raise the kids he stayed true to his and his wife’s plan to raise the children in the US; two of which are doctors and the other is successful in business. To me this trip can be called a success, just by having the time to have wine with Micheal. 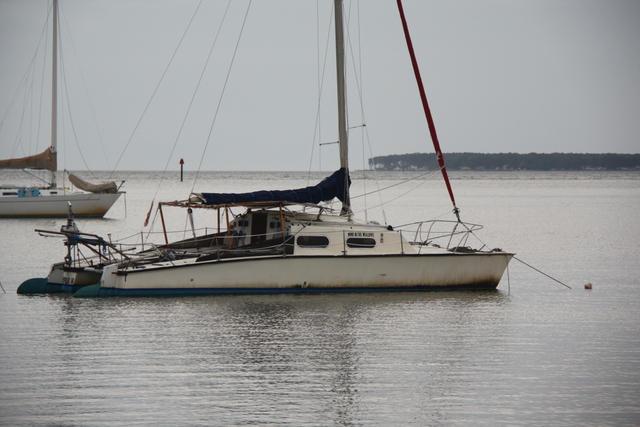 Michael’s early Prout, “Wind in the Willows” at anchor in Deltaville, VA

We also met Sean and Louise in Deltaville, this couple has spent the last 12 years touring the Americas on a converted double decker bus that was designed to be completely grid dependent and were just making the move to water. Their fist boat which was at the marina to have some work done is a 50ft, 100k pound, steel trawler; essentially a small ship. They got some private instruction for sometime and are looking to take off and potentially cross oceans on that single screw boat! Oh and if your in the market for a converted doubledecker bus, let me know I can get you in touch with them! The last folks worth a mention are Ron and Mark, we met these two at the only restaurant in the tiny fishing village of Reedville, VA. Ron just retired from flying F16s in the Airforce and decided he wanted to sail so rather than taking lessons or starting small he bought an early 80’s IOR (International Offshore Rule) boat. For folks not familiar, it would be like buying a not very well maintained early 80’s Lamborghini for your first car; crazy complicated maintenance, out dated impossible to find parts, super scary handling characteristics, but crazy fast once mastered. Mark was hired as a captain to help sail the boat from Norfolk, VA to Baltimore, MD. Mark’s past life was a Navy Salvage diver who then retired to mostly sail boats between the West Coast and Hawaii where he currently lives. These guys estimate it took at least 300 man hours between them just getting the boat seaworthy for the ride up the Chesapeake and once in Baltimore Ron has his hands full with endless more projects! Both super nice and interesting folks who both gave us offers to meet again when in Baltimore or Kona.

Ron and Mark with us at the Tiki Bar in Solomons, MD

Boat work. . . it was thought if we bought a new boat I wouldn’t be burdened with so much maintenance and repair headaches! Well maybe there are fewer tasks, but its hard to tell, because there isn’t anything to relate to as our old boat Frog was much too simple to use as a relative comparison. I thought I’d have time to piter around on small upgrades here and there (water maker, inverter, SSB, etc) but unplanned failures continue to occur which require attention. So far our electronics have been a big headache with intermittent failures of AIS, Wind and GPS all which have magically resolved themselves with no concrete resolution, though I have taken everything apart (maybe loose connections?) Just yesterday the air conditioning condensation pump quit and the generator impeller died with less than 100hrs of use. Countless other gremlins and hiccups have taken a lot of my time so nope, the water maker is not yet installed. Later this week we will be redoing our battery bank increasing our charger size, installing an inverter and much more sophisticated AC and DC monitoring systems; but we’re paying some who knows what their doing while I watch over their shoulder! I shouldn’t be complaining each little hiccup lets me learn a bit more about the boat which is important, I just wish the frequency was less; which should begin to decline as she really hasn’t been put through her paces until now.

All in all it’s been a great trip so far with all the folks we have meet, great little towns we’ve seen and a wonderful sunset almost every night. In the coming weeks I should get more time to study the subjects I’m hoping to and post more on the blog. 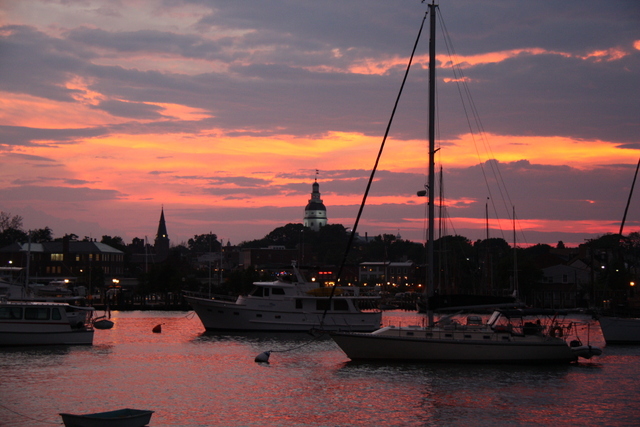