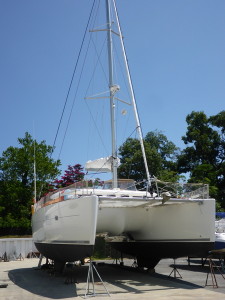 We spent a few days on the hard at the Pleasure Cove Marina to get new bottom paint and a wax job on Ryana.  Pleasure Cove is a little marina tucked away on Bodkin Creek and is one of only a few places on the Chesapeake Bay that can haul us out of the water.  Everyone there are really nice and we enjoyed our time at the marina!  But a boat is not supposed to be out of the water!  It’s interesting…first off we were at a slight tilt.  Not so much to bother you but when you get up you can feel it and are off balance!  Then no using the sinks so pretty much no cooking on board.  And forget about air conditioning which is water cooled.  You also have to climb a ladder to get on your boat since the transom is 6ft off the ground.  It’s interesting.  I know there are folks who spend weeks and even months living on their boat on the hard and manage fine, but I was glad it was only a few days!  A boat is just supposed to be in the water.  🙂

We did have a funny / scary incident with Stanley.  We’d been there a few days and were lifting him up and down with no problems.  We were a little worried he’d fall off but he hasn’t fallen off the boat before so we let him be.  However, we didn’t anticipate how strong his anti-shower sentiment was.  I had the hose in my hand, to fill our water tanks not even to shower the dog, and he took one look at me and went leaping off the back of the boat!!!  He landed and rolled and got up.  We were freaking out and went to see if he was ok.  He had scraped his chin and paws up a bit but other than that was fine.  I cannot believe that dog hurled himself off the boat from 6ft up just to avoid a potential shower.  So crazy!  At least he’s not hurt!